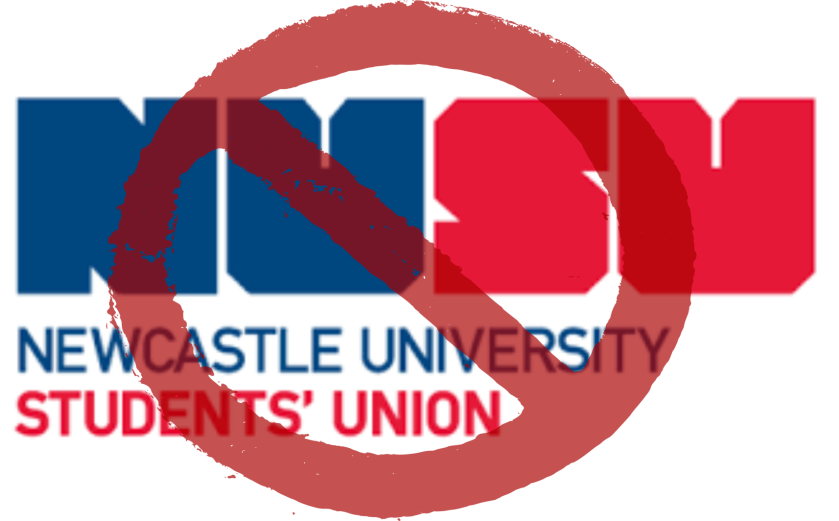 The Students’ Union is considering redesigning its logo after a number of students complained the current one “looks like something you would make at the back of a GCSE Graphics lesson.” The bunch of little snobs, who claim “graphic design is not just our passion, it’s our lifeblood” have created a controversial petition calling for its removal, which has gained over five signatures. The leader of the group, who we will not name as we just don’t like the look of ’em, has shown The Lampoon a number of their own alternative designs, which we think are ‘going right up on the fridge’. Do you think their current logo looks outdated? Maybe your mind will be changed after you see the competition…

The designer known as ‘$k8r Dud3zz’ originally created this template for her MySpace page, but says she dropped everything and wanted to help, when she set eyes on the logo currently used by NUSU. Ms ‘Dud3zz’ describes her ideas as a “techno sparkle from the space-year y2k20, which is still saying respek [sic] to the old-timey university vintage.” However, we at The Toon Lampoon do apologise if you have had to wait over 10 minutes for your modem to just load this.

Al Coholic, who designed the branding, said “When I first heard about the need for a new label, I walked across high mountains, down rich valleys and through succulent fields, just to lick the luscious dew off our rich and hearty hops”. We at The Toon Lampoon are not really sure how this relates to the SU, but apparently, Mr Coholic says a pint of it costs £7.99, so we should probably give this one a miss.

This minimalist design, comprised of just the letter “N” written in Helvetica typeface, was submitted by a well-known Swiss graphic design bureau, who were allegedly paid around £200,000 for their work. It is a bold statement said to “recognise the union bridges all students like the stroke between the two parallel signs of the letter, all while it still maintains good grammar by ending all sentences with a full stop.” For those of you who can’t speak Pretentious, we at The Toon Lampoon fully empathise with those who have run out of any good ideas.

This bunch garish shapes and colours was submitted by designer Waldo Collins, who told a reporter from The Lampoon “I will never rest until everything looks like humanity’s greatest achievement, London 2012” he is then reported to have pulled down his trousers and given a sweet embrace a life-sized statuette of the London ‘Wenlock’ Mascot while shouting “Hear me, I am the Olympic man!!!”

Unsurprisingly, not everybody is pleased with the proposed change and a counter-petition has been set up in response to the calls for a new logo. The petition states that it would be “removing history” to change something which has been in use since 2011, and that “most those kids complaining probably weren’t even born then.”

To have your say on the change of logo the SU is going to hold a referendum campus-wide poll on whether their logo should be replaced with one of these designs or be amended with a plaque explaining its lack of artistic merit.