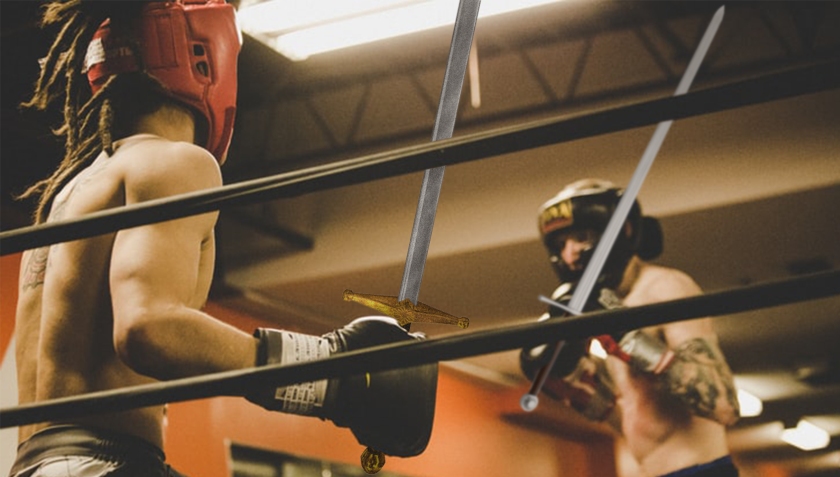 Sources have revealed that competitors in the well-known Newcastle boxing event will be forced to battle with swords because of the government’s social distancing guidelines.

A representative from the Students’ Union said that due to health and safety concerns, the bladed weapons will have to be at least four feet long. This is to “limit the transmission of the coronavirus from splatters of blood.”

He added that while a date had not been set for the event, ticket sales for the event are now open. It’s being billed as “24 fights, 12 matches, one ring and a dozen funerals! What a bargain!”

Jock Knapp, Lampoon sports correspondent, said: “You’ve always wanted blood, cheap trebs, but mainly blood, and now you’re in luck! Come on down to Venue and see a whole bunch of your fellow students literally get chopped to death, all in the name of entertainment!”

But, without further ado, let’s meet the fighters!

Lance said to The Toon Lampoon “Well, yah, I first got to know my way around a weapon when I was in Stonyhurst College” and added that “Oh, wouldn’t it ever so nice to mame some commoners instead of a fox for a change?”

Phil said to The Toon Lampoon “I’ll have you know I graduated top of my class in HTML-based medieval combat” and he added that “I’ll jujutsu the shih tzu out of anyone who tries to come at me.”

Uni: Newcastle
Course: Photography
Weight: 10 st
Height: 6′ 2″
Penis: “A cock so good it could be a stock image”

Chad said to The Toon Lampoon “these lot’ll be in a shock when they realise they’ve brought a sword to a gun fight. These two guns right here’ll finish ’em off.” He added that “I don’t believe in no weaponry, but I do believe in a good mask.”

Górdóné said to The Toon Lampoon “I’ll chop my oponent up so fien they’ll give me both a Michelin star and a belt” and he added that “my 1.2192 m (he’s French) knife can take a good beating.”

For all those who’re still reading this far down in the article, I’ll once again say you should get tickets as this Fight Night is the first time in years it will not be broadcast live by NUTV. This is because their incoming Station Manger, who The Toon Lampoon regards as a “right dickhead” want’s to abstain for the slaughter on moral grounds. What a wuss.