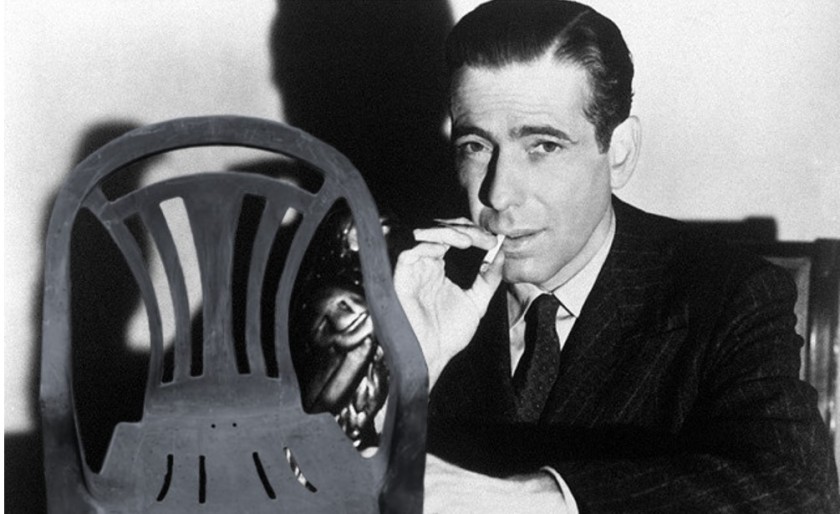 As I pushed past groups of youths and people returning home from work, tired hands pulling their hoods down over the rain, I realised any one of them could be Seat Von Scrutiny. It was clear my usual avenues of investigation – cyberbullying Piers Morgan on Twitter – wouldn’t yield results fast enough. I only sent three Tweets saying he was crap on Good Morning Britain before I stopped walking. The Betfred was in front of me.

My face was basked in the yellow of screens throwing up gambles, odds and pictures of footballers. I’d resolved never to come here, unless desperate: the only thing I gambled with was my life, and at times, money.

I took a deep breath, took my fedora in my hand and pushed open the door.

“Hey, Sylvia!” I called. The lights were off inside, but I know she’d be here somewhere. “Sylvia, it’s me.”

“What?” came a muffled voice from out back.

“Well, I’m glad I know it’s you,” she began, her voice getting clearer and clearer with the sound of her footsteps, “but we get a lot of people in here, so I’m afraid you’ll have to be-” she emerged behind the desk, “oh, it’s you!”

“I did tell you. I know I vowed never to come back here, after I-”

“Was told by staff never to come back here.”

“After I decided gambling was beneath me.”

“After you bet that Wayne Rooney would score a try, and started a fight when you lost.”

“After I realised I was above it, yes.”

Sylvia started counting the cash in the register.

“And yet here you are. Real as I am, or your very attractive boyfriend, who I have met,” she definitely said. “Are you working a story?”

“The biggest story of my career. The role of Chair of Scrutiny’s opened up again.”

“There’s more. The frontrunner is totally anonymous, and I’ve been charged been finding who it is.”

Sylvia stopped counting the cash. She stopped leaning over and looked me dead in the eyes. It was like I was naked. Maybe I should have put trousers on.

“You want to talk to the scholar, don’t you?”

“I wouldn’t be asking if it wasn’t a last resort.”

“I know,” she sighed. “Whenever The Lampoon start digging, people get hurt. They… they sink. They sink faster than your Facebook likes.”

I ignored the slight. We’d had literally ones of likes just that day.

“Yeah, she’s in. She’ll be difficult though. You know what they say about genius”

Sylvia turned on the light and started poking the scholar with a broom.

“Hey, Einstein, wakey wakey, there’s a hack here for you.”

She lifted her head up from the floor, eyes bloodshot.

“Information,” I said, begging my voice not to shake. It was hard not to be starstruck.

“I know how this works.”

I walked over and crouched by her side. I took out a bottle of Tesco own brand vodka and some poorly advised betting tips that a man in a pub had given to me unprompted.

She received them gratefully, and after a swig of the vodka, she sat up and faced me.

Her eyes widened. She looked out the window before she started speaking.

“I can tell you about the Kennedys,” she began, “or the Clintons or the Borgias or House Bezos,” recently recognised at fifth in line to the English throne, “but not the Von Scrutinies.”

“I know what they’re capable of.”

Blood shot out of her head and she collapsed. I jumped up, stumbled a couple of paces back and fell right back down again. My legs moved like mad until I was up against the wall. My palms sweaty, I looked at where the bullet had come from.

A huge burly man had an arm over Sylvia’s throat. In his other hand was a smoking Desert Eagle.

“I didn’t favour her odds,” he smirked, pocketing the gun.

I cursed myself at not thinking of that one.

“I’m gonna get to the bottom of this,” I managed.

Damn, that was another good one.

“Are you with the Von Scrutinies?” I asked.

“No my friend. Think bigger.”

I looked at the scholar, and the pool of blood forming around her head, slowly enveloping the beer cans and fag ends.

“You didn’t wanna know who Von Scrutiny is?”

“We have other sources. The more people who know, the more,” he looked at the scholar, “loose ends we have to… how to put this delicately… shoot in the head.”

“Is that what we are?” Sylvia asked, voice shaking.

“Quiet. But yes, I’m afraid so. Gambling and journalism are universally respected institutions, so it’ll be hard to cover up, but another bookies bust-up gone bad? Who isn’t gonna believe that?”

“So you don’t even want any cash?”

When he glanced down at the cash taken out the register, Sylvia threw her head back and rammed it into his face. He cried out and let her go. She spun round and socked him around the face and kicked him in the balls. He keeled over on the floor and she jumped over the counter.

The people in the city were blurs as we raced down the bus stop and into an alleyway. Down, down, down, past a group of kids getting weed for only £90 a gram, left, right, left again, under orange streetlights, and then into another alleyway. We looked up and down at either end to make sure we were safe. Here, our only company was foxes. As we stood catching our breath, she handed me a handkerchief. I was almost done wiping the blood off my face when I said:

“Why didn’t you tell me he was there?”

“And end up like the scholar? No thank you,” she was pacing up and down width-ways. “What are we gonna do without her? The city’s breweries are gonna be bankrupt within a week.”

“Forget the city. What are you gonna do?”

“My entire career relies on getting vulnerable people to gamble away money they don’t have.”

I was blinded as the alley flooded with light. The helicopter whir overhead made me think the police were onto us, but on its underbelly I instead saw a logo for-

A rope ladder unrolled itself. She was about to get on. Shouting over the noise, and pulling away her hair, which was getting blown every which direction, she told me:

She put a hand and foot on the ladder and waved at the pilot to take off. A few moments and she had disappeared into the horizon.