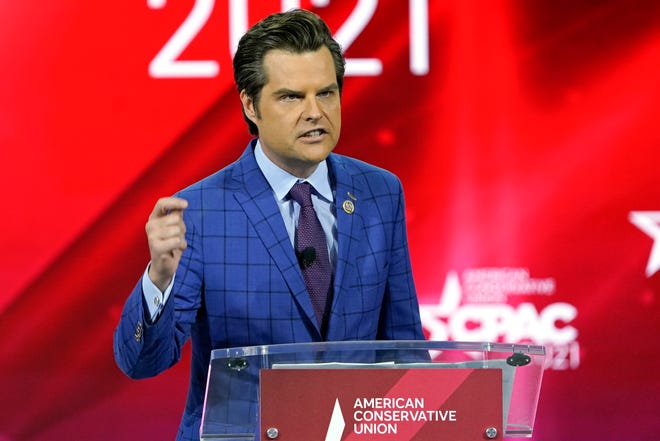 Congressman Matt Gaetz’s lawyers came under criticism today, following what appeared to be an indication of the main theme of his defence: that a female human would, of her own free will, enter into sexual intercourse with Matt Gaetz.

Matt Gaetz, the 38-year-old Representative for Florida’s first congressional district, has been described by his critics as having “a face that only a mother could love, providing that mother had been fed a large number of hallucinogenics and, presumably, her own eyes.”

But Gaetz’s legal team remain optimistic, despite experts in the field of facial mapping putting out a statement referring to the Representative’s visage as “God’s cruel mistake”.

“The idea that our client, a Republican Congressman, would be even tangentially related to human trafficking is an absurd idea,” a spokesperson for Gaetz’s legal team said today.

“If you remember, Congressman Gaetz has previously been the one dissenting voice against a Bill intended to curb sex trafficking, as well as living with a lithe, aesthetically-pleasing teenage boy that he refers to as his adopted son despite his inability to prove that with, say, some sort of certificate.”

“If our client had committed these acts and then had also been accused of raping a victim of human trafficking, then surely it would be a total slam dunk for the prosecution. It’s ridiculous that he would take such a suicidal risk. I would instead invite you to consider the alternative: Matt Gaetz has a face that women of a respectable age are attracted to.”

This isn’t the first time that the law firm of Rich, White, and Mann have taken an unconventional route while defending members of the Republican Party. Earlier this month, they argued that Madison Cawthorn could not have been molesting a college student at that exact time and date, as he was busy running a marathon, while at former President Donald Trump’s second impeachment trial, they successfully managed to make the entire English language not mean anything anymore.

If indicted, Matt Gaetz will be sentenced to receive high-fives from every member of the Republican Party present on Capitol Hill.